With close to 35 years under its belt, Flowcrete Group has enjoyed a rich and colourful history that spans six continents.

Since the company's launch in 1982, Flowcrete has had much to celebrate. Employing some the best people in the industry, flooring some of the world's most iconic buildings and enjoying countless other awards and operational successes, Flowcrete is a flooring company with much to look back on and undoubtedly a bright future still ahead. 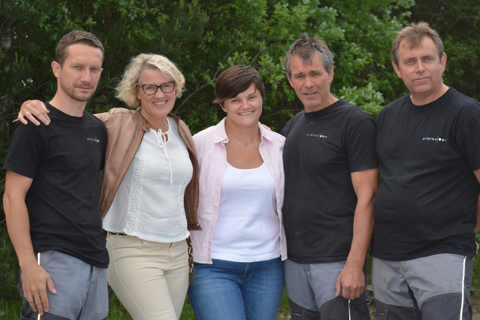 On June 1st Flowcrete acquired Elmico, a high-tech manufacturer of polyurea waterproofing systems as well as epoxy and polyurethane polymer flooring systems, based in Oslo, Norway. Joining Flowcrete will facilitate organic growth within Norway thanks to increased critical mass, local manufacturing and a broader product offering. Being part of Flowcrete means that Elmico will have access to new markets all over the world thanks to its global network of offices, sales teams and facilities. 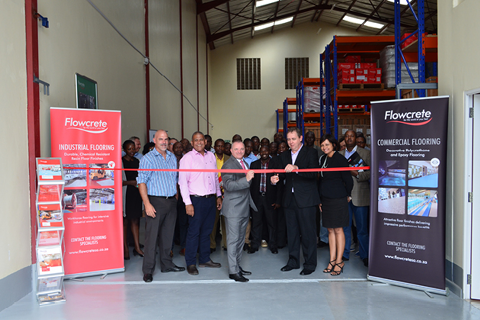 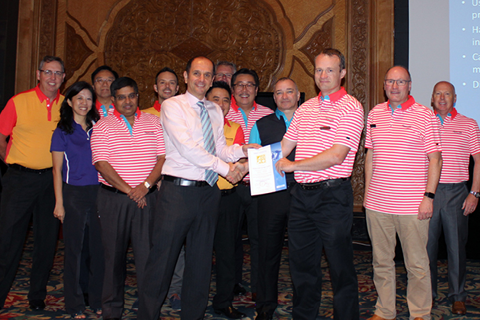 In 2015, Flowcrete secured International HACCP Certification for its Flowfresh range of antimicrobial protected cementitious urethane floors. This certification means that food and beverage producers operating a Hazard Analysis and Critical Control Point (HACCP) based food safety programme can specify flooring materials, safe in the knowledge that they will meet the relevant regulatory authority’s standards for safe procurement, production and processing as well as the requirements of the world’s leading quality and food safety standards. 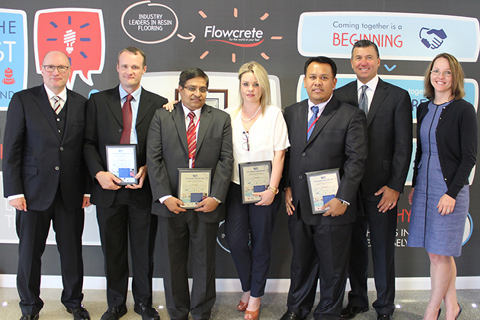 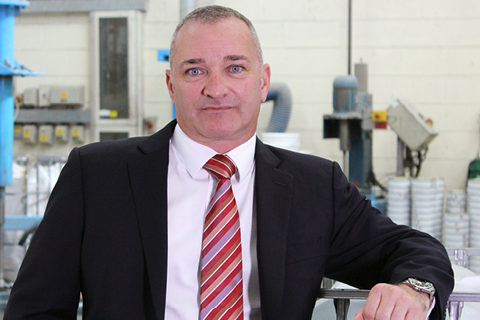 In 2016, Flowcrete appointed Craig Brookes, previously the Flowcrete Group Vice-President and International Managing Director, to spearhead global operations as its new President. Craig Brookes said: “Being appointed President of Flowcrete Group is an incredible honour, especially as over my two decades at Flowcrete I’ve seen the company expand and grow from a small UK business to world leader in resin flooring active across six continents. 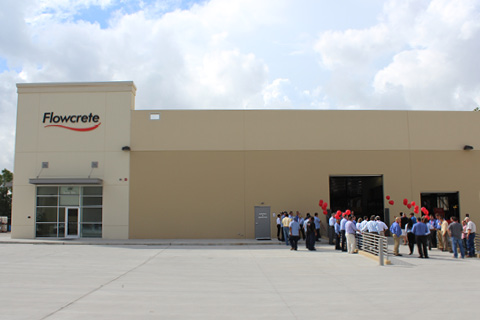 In 2014, Flowcrete Americas celebrated the opening of its new state-of-the-art manufacturing plant and office facility in Spring, TX. The 30,000 square foot site is almost double the size of its old facility, making room for significantly larger production, office, warehouse, and laboratory areas, in addition to six more loading docks and double the number of both packaging and liquid mixer stations. For enhanced safety, the plant features a highly protective fire suppression system that includes a foam-based, high-density ceiling sprinkler system, as well as end rack sprinklers. 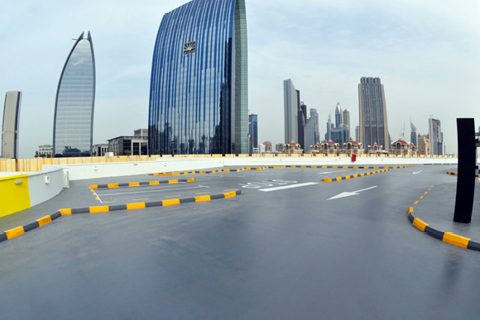 The largest and most visited shopping mall in the world, The Dubai Mall, used over 540,000 square metres of Flowcrete’s Deckshield car park decking to refurbish its huge parking facility in 2013. To cater for the large numbers of visitors the retail centre has built the biggest car park in the MENA region, with over 14,000 parking bays across three high rise buildings. The difficult on-site challenges deteriorated the initial floor finish and so the owners chose Deckshield to ensure a seamless, waterproof, colourful and long-lasting finish despite the harsh conditions. 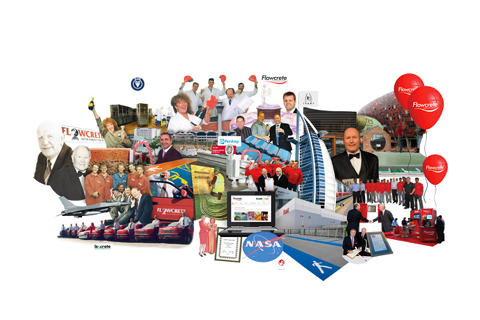 Since its inception in 1982 to its 30 year anniversary in 2012, Flowcrete has built up a long list of achievements, awards and accolades that include working on some of the world’s most prestigious construction projects, expanding into 6 continents and successfully integrating with the global manufacturing powerhouse RPM – to name just a few. And the plans don’t stop there, as Flowcrete’s energetic and ambitious staff are always setting themselves new targets to reach, looking for new innovations to implement and seeking out new markets to explore. 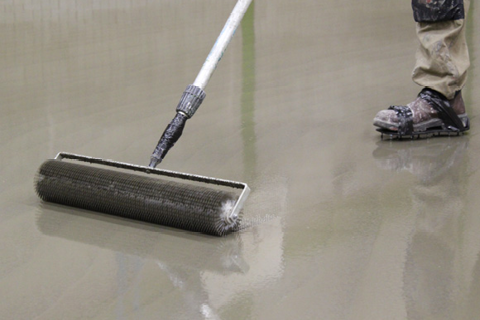 2011 saw an environmental milestone in the flooring industry with the launch of the Isocrete Green Screeds range from Flowcrete UK. To further Flowcrete’s commitment to providing the construction world with sustainable building materials it developed a line of screeds free from Ordinary Portland Cement and which is manufactured from up to 40% recycled materials. 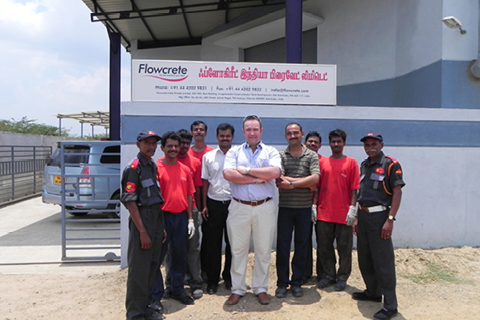 In 2010 Flowcrete sealed its bid to tap into the Indian marketplace with the opening of a new office in the south of the country. Flowcrete India opened in the major industrial region of Chennai, to give the company a launch pad into the growing number of construction projects taking place on the sub continent. Located on the south eastern coast of India, Chennai - once known as Madras - is developing rapidly.It is host to a number of industries such as automobile, technology, hardware manufacturing, and healthcare industries. 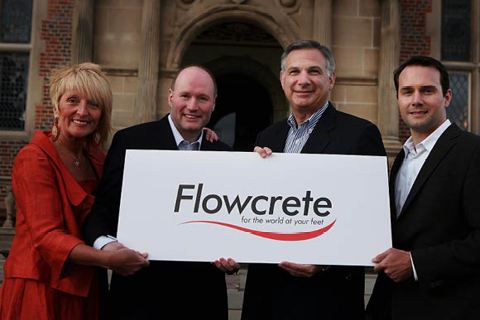 In 2008, Flowcrete became part of Ohio-based RPM International Inc, a stock-exchange listed company with subsidiaries that manufacture and market high-performance coatings, sealants and speciality chemicals all over the world. Frank Sullivan, chief executive of RPM, praised Flowcrete's' vision and entrepreneurship and said: "In this fast-growing and highly fragmented market, service and reputation are critical to long-term growth. 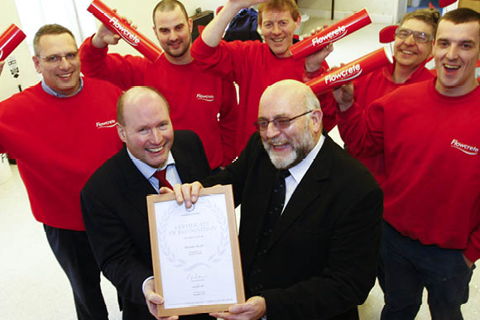 In 2007 Flowcrete received a glowing report for its staff management in an Investor In People report. Praise was heaped on the positive, loyal, dedicated and well-motivated staff at the company, as well as the staff development policies and family-life/work life balance arrangements. The management team were commended for their approachable and receptive manner. Further award recognition followed in 2008, with the company attaining its first ever Queen's Award for Enterprise for its phenomenal growth in the export arena. 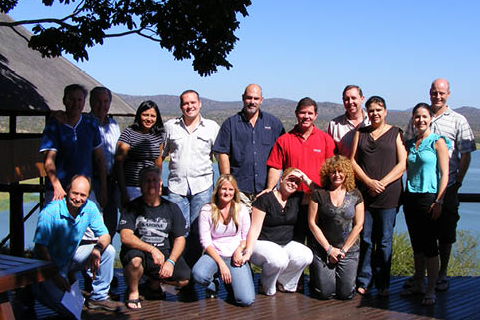 In 2006 Flowcrete acquired Ivory Industries - a South African synthetic system manufacturer that was rebranded as Flowcrete South Africa. The company went on to gain international recognition for providing extremely durable and resistant synthetic resin systems for corrosion and abrasion protection in the industrial environments. Today, Flowcrete Africa has two manufacturing facilities located in Durban and Johannesburg as well as sales offices in Durban, Johannesburg, Cape Town and Nairobi. 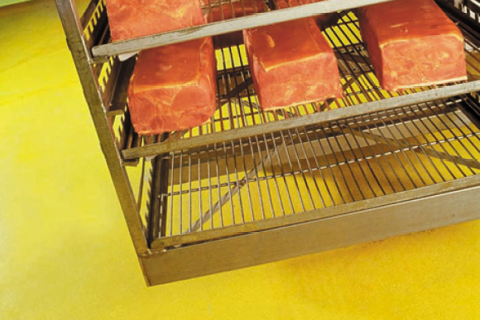 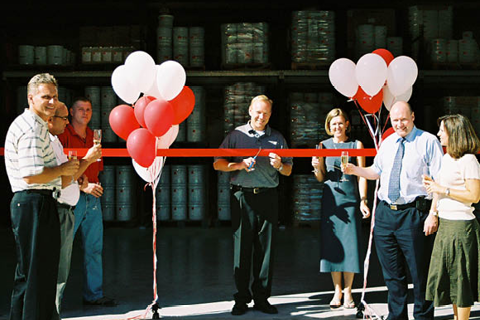 Growth across the pond saw Flowcrete establish itself in North America, opening a manufacturing plant and sales office to head up stateside operations located in Houston, Texas. The new facility and sales infrastructure would allow Flowcrete to penetrate the North American market as well as Central and Latin America. 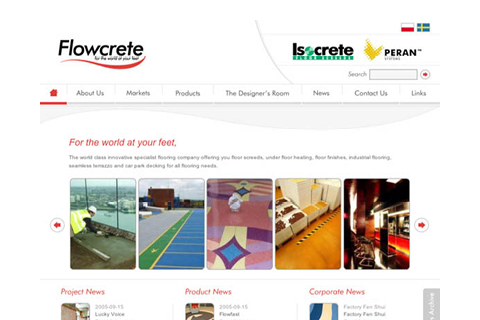 With the digital revolution in full swing, Flowcrete launched its first ever website bringing global clients a snapshot of the company's entire product portfolio at their fingertips. With Flowcrete's new online portal, a new era of reaching the company's target market was about to begin. 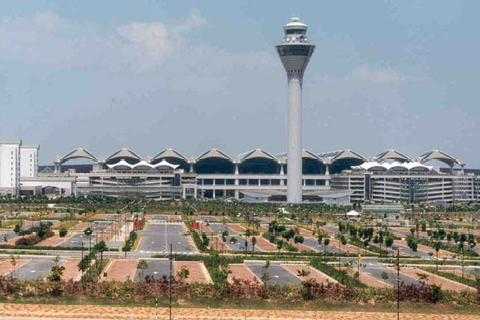 An ever-growing client base including Kuala Lumpur International Airport, Nokia, GlaxoSmithKline, Roche Pharmaceuticals, L'Oréal and Sharjah Mega Mall Shopping Centre ensured growth across the industrial and commercial sectors overseas. The further acquisition of Perstorp Construction Chemicals in 2002 opened up new markets in Scandinavia, Poland and Eastern Europe proving Flowcrete had much to celebrate on its 20th birthday. 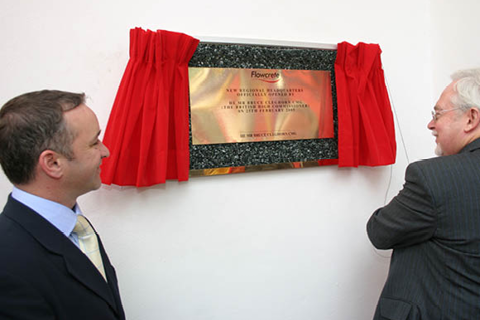 1995 signalled the year that Flowcrete's world domination really began with the acquisitions of Isocrete Floor Screeds, Gyvlon Floor Screeds, Chryso UK and Beaver Anchorlyte. At the same time as bringing new businesses in, Flowcrete was also expanding opening offices in Hong Kong, the Czech Republic, Thailand, China and a manufacturing plant in Kuala Lumpur, Malaysia. In this era of fast growth a number of projects were coming online including the largest ever screed contract to date at Chek Lap Kok Airport in Hong Kong. 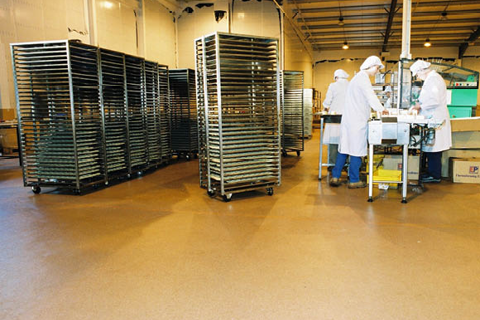 1992 | A Hygienic Solution for the Food & Beverage Industry

Recognising the importance of the clean barrier within food processing, production and packaging environments a new flooring formulation was on the cards. Flowcrete's R&D team headed to the lab to develop a new floor solution that would positively assist in microbial control. A polyurethane mortar containing an antimicrobial additive within the resin matrix was born, Flowcrete Flowfresh range, which remains today as one of the company's most popular product lines. 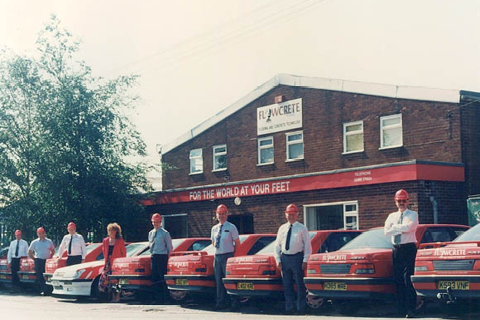 Known as the Red Army of the UK flooring industry, Flowcrete began to expand its nationwide sales team - all of who were instantly recognisable from the company's traffic red logo car fleet. The team ventured to all four corners of the country, securing sales for the company's growing portfolio of seamless resin floor and wall coating solutions. 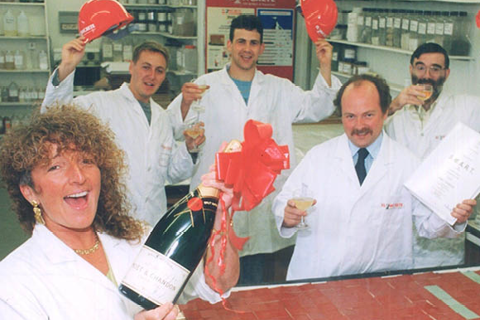 It wasn't until 1990 that the company really began to take shape. Its growth up to then had been decidedly modest following its first contract, however growing attention from household names had finally allowed Flowcrete to hit the £1 million turnover milestone. This was swiftly followed by a number of award successes from the British Department of Trade and Industry including the Small firms' Merit Award for Research and Technology (SMART). 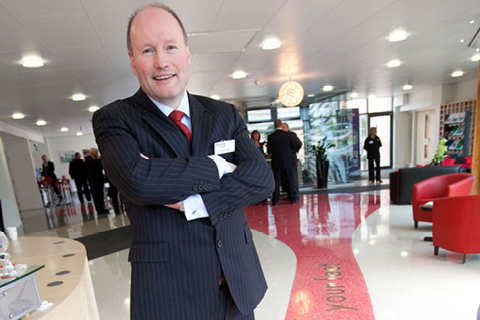 The turn of the century witnessed the arrival of Mark Greaves to the company - a business graduate with a plan to take the company's growth forwards. Since joining the company in 1989, Mark has taken the business from its Cheshire roots and established it as a major global player within the industry. 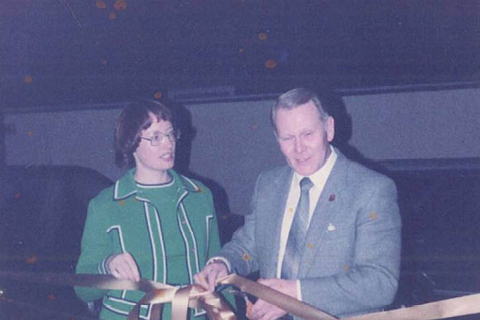 Like many small businesses Flowcrete was R&D oriented and vastly undercharged for its services. A £40,000 turnover in 1982 rose to £600,000 moving closer to £1 million in 1989. But progress wasn't fast enough. To really take off, Flowcrete needed a business plan and a bigger manufacturing space. With some help from the bank, Flowcrete was able to open its first manufacturing facility in Congleton, South Cheshire. 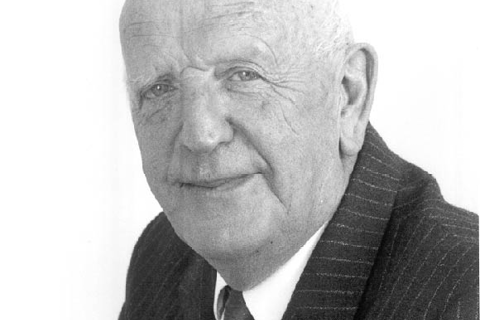 In the beginning, British inventor, Peter Gibbins - the late founder of Flowcrete - was challenged by a leading confectionary brand to develop a flooring solution that would offer an enhanced resistance to sugar. Proposing a cement-based resin formulation containing hardwearing aggregates that would be laid as monolithic screed on a suitable base and later diamond ground to reveal a smooth surface, Flowcrete's first product line was born.